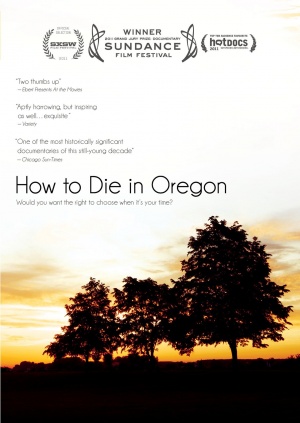 What does it mean to die with dignity? Is it that you have a say in how or when you die? Or in what state your mind or body are in when the event happens? Perhaps the most unnerving element of dying isn’t the eventual death, but rather the path marred by pain, loss of bodily as well as mental function, and being memorialized as a bedridden patient heavily medicated and assisted by cold machinery. To die with dignity, then, is regaining the power death has over oneself by making it a choice rather than a process.

This is the thesis that How to Die in Oregon arrives to.

In 1994, Oregon became the first state in the U.S. to make physician-assisted suicide a permissible act. The only other places allowing such action were Switzerland and the Netherlands at the time.

Director/Filmmaker Peter Richardson elects the use of a videotaped assisted suicide, similar to a home video, as a prologue to the film. By using this, we are engaged because of the symbolic and cultural significance of home videos as a comforting and familiar remembrance of events past. This technique is successful in presenting an unsettling, yet fascinating death of an elderly man as he drinks a prescribed elixir mixed by a nondescript, plainly dressed woman without hesitation. He has gained control over the one thing that his illness has taken away from him, death on his own terms amongst friends and family. The thesis has unfolded.

What comprises the film’s structure are vignettes of those with terminal illnesses (a veteran T.V./radio host whose vocal box must be removed, a man suffering from ALS whose quality of life is quickly declining, and a man with prostate cancer whose insurance doesn’t cover any treatment but suicide). Some that were suffering from their illiness successfully complete their physician-assisted suicide while others unexpectedly die from complications or are physically unable to self-administer their prescribed death. Another vignette shows a woman’s successful campaign of Death with Dignity’s passage in the state of Washington after her husband endured a painful decline into death. While this vignette shows a gradual acceptance of assisted-suicide in our society by presenting the passage of the act, it does however not add to the poignancy or process of electing the choice of death or the resulting events for it.

With the exception of the woman’s storyline, all of the vignettes add substance to the film by allowing the viewer to ask the question, “Why?” and promptly begins to answer that question with another vignette that becomes the focus of the film.

We are presented with Cody, a 54 year old mother with liver cancer on the cusp of her assisted suicide. Her storyline gives a mixture of hopefulness and hopelessness stirring the same emotional arenas that one would give to the ethical and moral dilemma that is physician-assisted suicide. Richardson does a wonderful job of splicing scenes of great endurance and compassion (Her several nature walks with her children and husband while evidently having a difficult time breathing) with those of pain and grief (her declining health and her numerous emotional breakdowns). They transition at the point one finds a sense triumph in her adversity only to be reminded that death is the only resolution, and how she must face it is her choice. Much like the prologue, she succeeds in dictating when she is to die; surround by friends and family, on her terms.

There is no doubt. These people will die as a result of their terminal illnesses. But, how they die, because of Oregon’s Death with Dignity Act, has become their choice. The most useful vignettes lay down a foundation of questions that begin to be answered through Cody’s story. The film doesn’t sway one’s opinion either way in regards to the practice being ethical or moral, but rather generates a sense of understanding on why that decision is made. While one might not support such a choice, it does generate a sense of respect for it.

Peter Richardson’s How to Die in Oregon is distributed through Clearcut Productions and available through Netflix and the HBO Channel. http://www.howtodieinoregon.com/