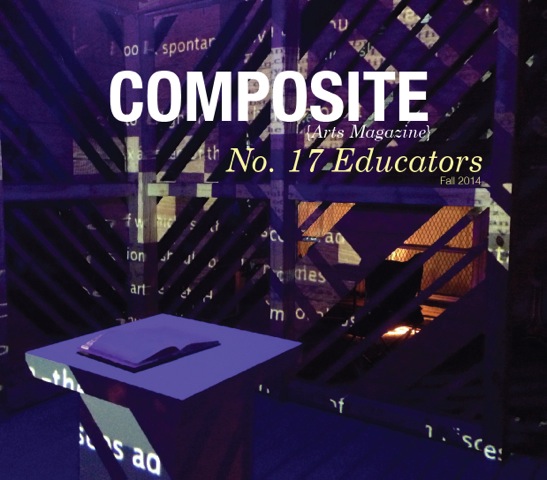 It is a rare contemporary conversation about the arts that is not, at least tangentially, also about pedagogy. The arts are obsessed with education. Creatives must understand their craft, be aware of their current and historical contexts, have the skills to write about and explain their work eloquently and effectively, and possess impeccable social and political skills. Arts higher education programs are one of the few bastions of classical academia, outspoken about the fact they are not trade schools, rather a time and space provided for conversation, for learning ways of thinking, for gaining “soft skills”. Most of all, we should not be concerned with actually selling our work while we’re still learning to make it, we should just be focused on the making.

Educators tasked to impart these skills on to the next generation of creatives have their work cut out for them, and they know this, because they are still learning all of it themselves. One of two main requirements in order to teach the arts in higher education, besides the requisite degree, is being actively engaged in their own creative practice. In essence, being an arts educator is to have and to maintain two full time careers that are intrinsically linked. A heightened intimacy and vulnerability is undeniable within these teacher/student relationships, as they themselves are working to figure out their own path, while guiding students towards theirs.

is currently soliciting art submissions for a coloring book to benefit homeless children and child victims of poverty and domestic violence. Please consider submitting or sharing this request with your students and fellow artists. For more information, please visit enchantedwatermelon.com.

is as an international award-winning artist and filmmaker, native of Buenos Aires, Argentina. She is Professor in Photography at The School of Art and Design of the University of Illinois at Chicago. Her works have been exhibited widely in the United States, Latin America and Europe. Malagrino is the recipient of numerous grants and awards including a 2010 Guggenheim Fellowship. Find her work at silviamalagrino.com.

is an artist living in New Orleans, where he teaches painting and drawing at Tulane University. Solo exhibitions of his work have occurred at Cole Pratt Gallery and Staple Goods. His work has been featured in New American Paintings, and is represented in collections such as NOMA, Iberia Bank, and the Boston Medical Center. Aaron has enjoyed residencies with the Ragdale Foundation, VCCA, and the Joan Mitchell Foundation. Find his work at www.postmedium.com/aaroncollier.

has served the children of the Cabrini Green Public Housing Community for 25 years at Jenner Academy of the Arts. He received the Golden Apple Award for Teaching Excellence in 2005. Find his work at mathiasschergen.com.

began their collaborations as undergraduates at Alfred University. Burns received his MFA from the San Francisco Art Institute. Martin received an MFA from The University of California, San Diego. They have jointly participated in residencies at Eyebeam, Signal Culture, and The Experimental Television Center. Their collaborative works have exhibited nationally and in venues across Asia and Europe. Selected videotapes are distributed by VTape, Canada; Recontres Internationale, France; and Video Data Bank, USA. Darrin Martin is an Associate Professor of Art Studio at UC Davis California. Find their work at holyokeresearch.blogspot.com & darrinmartin.com.

lives in Miami Beach and has a Master’s of Fine Arts degree from Spalding University in Louisville, Kentucky where he was a student fiction editor at The Louisville Review. Adjunct Professor of English at Broward and Miami-Dade College, his work has been published in Penumbra Literary, he is a fiction co-editor for Blood Lotus, sits on the Advisory Board of Reading Queer, and is completing a collection of stories and poetry.

received his MFA in Painting and Drawing from the University of Minnesota, and his BFA from the Rhode Island School of Design. After several years of working as an adjunct professor of art in the Minneapolis area he recently accepted a full-time, tenure-track position at Hartwick College, in Oneonta, NY. Further samples of his work may be seen at his website: rbarlow.net.

received a BFA from Bowling Green State University and an MFA from Tyler School of Art, Temple University. Originally from Ohio, he has lived in Chicago and taught at the University of Illinois at Chicago since 1981 where he recently retired this past June. His work is based primarily in photography but has included sculptural installations, an interactive virtual reality piece and experimental offset lithography publications.

studies medieval literature in the English doctoral program at the City University of New York, Graduate Center. He teaches literature at Hunter College. His poems, stories, and research articles have appeared in various publications, and his book Retractions and Revelations is available from Jerk Poet (jerkpoet.com). He is also co-curator of the Ferro Strouse Gallery (ferrostrouse.com).