In the spirit of You Are Here, we are bringing you another interview with a Composite contributor. This week, we sat down with Danielle Sepulverez to find out where she is at and what she’s been doing since her essay was published in No.6 Process.

Composite: Your memoir, Losing It: A Semi-Scandelous story of an ex-virgin, was recently published by Bryce Cullen Publishing.  What made you decide to go the route of self-publishing?

Danielle Sepulverez: Years of disappointment!  No seriously, I had agents interested in my work but publishers were resistant because they said my memoir straddled genres and would be difficult to market.  I kept hearing, “it’s so well written and funny, but…” and since I’m not a patient person I felt that the only way to get it out to the masses was to self-publish.  I knew if I waited and another book similar to mine ended out on the market I would always kick myself for not taking the iniative.  Self-promotion never was a deterrent, in fact regardless of whether you do get published by a traditional house you need to self promote, so I would be doing all the same things I’m doing now.

CO:
Writing nonfiction seems to be a slippery slope, especially when those
who made the biggest impact on your life, and know you well, are reading about themselves, or things about you
that they might not have otherwise known.   When you were writing the book, how did you decide what details to include and, more importantly, what details to leave out?

DS: Oh boy.  This is a tough question.  I made sure that everything revolved around me.  (That sounds conceited!)  But, I felt that if I wrote everything to the point of how I observed it, how I experienced it and how I felt about it, then that was the validation behind it.  I know my mother isn’t thrilled about some of the conversations I included in the book, but I needed to include them to show how I felt at that particular moment.  I really didn’t leave any pertinent details out of the book.  I feel like everything that mattered, whether or not it portrays me in the most positive fashion, ended up in the book.  I will say that I left out a few other heartbreaking situations with Matt Ryan that I experienced because it wasn’t essential to the point of the book. The ones that mattered were all in there because they directly related to my main message.  I didn’t need to demonize him to get my point across.

CO: For anyone that intends to self-publish their own book, can you give us a little bit of insight as to how you are going about promoting your memoir?  Any nifty tricks you’ve learned along the way?

DS: I feel like I’m still learning too!  What I can say is find organizations that share your message or your niche and talk to them. Get involved with their events.  Talk to people wherever you go.  I was being interviewed for a job and by the end of it, the woman interviewing me was logging onto Amazon to purchase my book.  You never know who you’re going to connect with and word of mouth has been amazing for me and I’m so grateful. Friends of my friends whom I’ve never met send me emails asking if I’m writing a sequel and tell me how much they love LOSING IT.  Word of mouth is priceless.

CO: You act, you write, you’re a filmmaker.  How do you find time for all your creative endeavors, and do you ever feel like one overshadows the other?

DS: It’s like dating.  When you really want to see someone, you make the time to make it happen.  It’s difficult when you have to work to make money in order to have the time to create your own projects, but I’m learning to make it work and prioritize so that I’m doing what I want to be doing as often as possible.  Writing probably overshadows everything.  I’m a novice producer, director and actress, but I’ve been writing creatively since I was six years old when my dad gave me my first diary.

CO: Do you have any plans and/or want to adapt Losing It for the screen? If someone were to make a feature out of it, who would you want to play you?

DS: I do want to adapt it!  A small group of friends and I collaborated and put together a six minute short film loose adaptation for the film festival circuit, but particularly Tropfest and the Hamptons International Film Festival.  We’d like to generate interest so that a production company will want to make a feature.  Everyone asks me who I would want to play me!!  I have a hard time deciding, but I love Mila Kunis and I think Shailene Woodley from The Descendants is really talented, so those two would be my fantasy choices.

CO: What projects are you working on now?  Anything your fans should be looking out for in the future?

DS: I’m writing a sequel to Losing It, so I hope to finish that over the next couple months, as well as producing and directing a one act play for the Strawberry Festival in NYC this summer.  We just wrapped on our short film adaptation of Losing It and now I’m in pre-production for another short film called “The Family Way” that has the potential to be a web series.  I’m also editing a work in progress memoir for my good friend Emily Walsh entitled Beautiful Disaster that chronicles her experiences with substance abuse and anorexia.

You can snatch a copy of Losing It in paperback or Kindle version here. 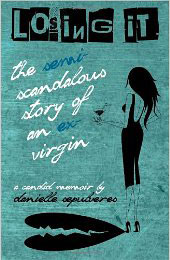