On Our Way to Tomorrow: the MCA Soap Opera 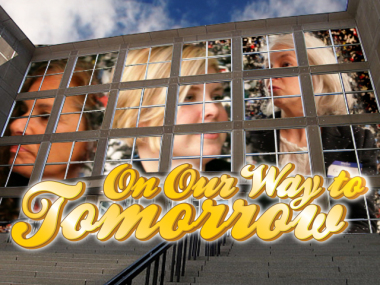 A couple weeks ago, I ventured down to the Museum of Contemporary Art in Chicago (MCA) to watch a screening of On Our Way to Tomorrow and conversation with one of our artists, Kirsten Leenaars (No. 3 Kith and Kin). Her video series is a thirteen episode fictional narrative focusing on the ‘real life drama’ of an art museum, presented as a soap opera. As part of the MCA exhibition Without You I am Nothing—which ran in 2010-2011, and where the works of art are meant to be interacted with—the creative process of Kirsten’s filming became entwined with the staff and visitors of the museum.

The main characters are the staff of the museum, each filling their actual role, but put on a persona and ambitions that (may or may not) be true to their personality. But like any good soap opera, there also is some extra spice, such as the manipulative ghost of the museum, a bathroom janitor/fortune teller, murder, and unexpected twists and romances. Yet this all takes place inside of a museum exhibit, so all ambitions and arguments are placed in that context. For example, two curators argue between themselves as one person’s exhibit got loud with applause after a performance, interrupting a gallery talk that the other curator had been giving. They then get into an argument about what kind of art and art viewing is better, performative and interactive, or quiet and introspective.

Overall the series is very tongue in cheek, poking fun at (and at the same time showing admiration for) both the genre of the soap opera and the museum as an institution. The soap opera was never scripted beyond a general guideline of what the conversation should be about, leaving the participants, both staff and museum goers, to shape the outcome of the work itself. When Kirsten was asked if the process of making the film or the final product was her main goal of the work, she replied that the end film was always her goal, and the interactive form of the filming was new to her, but she plans to continue making work in a similar vein.

I am glad to share this work with you, Composite readers, as we gear up for our winter issue, Interact. How would you define interactive artwork? Is it merely an object you can touch or walk upon, or a work that you directly influence the end result of? 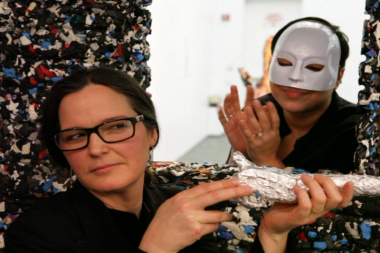 Family Swim, attempts to synchronize, the actual video for what is talked about in Kith and Kin: http://vimeo.com/48275035