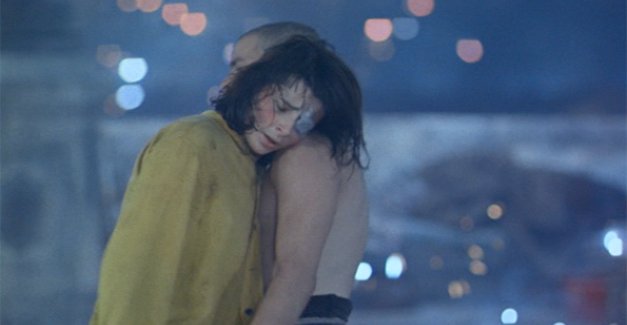 The weirdest, strangest, and most violent interaction, in my opinion, is the interaction between two people in love. This is well supported by any art house or foreign film where either one or both (or three, or four, or six, if the subject matter is polyamorous, a staple of foreign cinema, no?) exhibit traits not too uncommon to serial killers. The result is an inverse of the romantic comedy. Rather than leaving one feeling warm and fuzzy, one leaves devoid a soul.

Les Amants du Pont-Neuf (“Lovers On A Bridge”)(1991) is an exercise of that violent interaction. Center to the story is Michele and Alex. Michele, a recent vagabond, wanders Paris sketching people and objects as her vision slowly deteriorates. Alex is a vagrant dependent on downers to help him sleep through the night on Pont-Neuf, a bridge in Paris that is going through reconstruction. They meet one night as Alex returns to the bridge to discover Michele in his sleeping spot. He is immediately enamored, and thus begins a relationship of codependency: Alex assists Michele walking through the streets of Paris and Michele assists Alex by providing companionship through the night. During the film, baggage is revealed that neither is aware of: Alex confronts a Cellist, who spurned Michele as a lover in the past, and threatens him to leave the station before Michele finds the Cellist (who Alex thinks Michele is still in love with), only for Michele to find the Cellist and kill him at his residence.

The relationship operates in the same condition as the bridge, strained, decayed, and held together by its own collapsing structure. So too, these damaged human beings collapse on each other, supporting their ruinous lives, but only barely. Between slow moving scenes of deep elation for each other (drunkenly dancing on Pont-Neuf as fireworks exploded in the background in celebration of the French Centennial, running naked, silhouetted, through a beach as Michele grabs Alex’s erection and runs) are moments of physical violence towards others and at each other.

A grueling display of pleasure and pain, Les Amants works slowly from one extreme of love to the other and back again.

Les Amants du Pont-Neuf (“Lovers On A Bridge”)(1991) is available through Netflix.